Drinking and Driving, It Could Save Your Life


Editors foreword:
Last evening when I read the following story by our gracious contributor Art Cashin, in his highly regarded market letter "Cashin's Comments", I was a tad surprised to find that it was out of order. That's because his historical musings (as I refer to them) are found at the beginning of the market letter, not in the middle where I found this one.

Truth be told, it's the rare day anymore when I read much past the history lesson. I guess the 42 years I spent in the markets was quite enough for me and I don't keep up with the day to day ebb and flow of market movements like I did when I wore a younger man's trading jacket.

So even though Art still stays on the cutting edge of the markets, the man is no one trick pony, and he was wearing his reporter's hat when he passed this story along.

But your editor is no slouch either when it comes to recognizing history. And even though this tale is contemporary, I'm pretty confident that it's a historical first. I'm also more confident than Art that it's true. 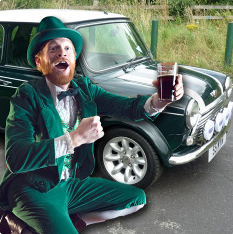 You Can't Make This Stuff Up

This questionable story was passed along by a normally reliable source:

The County Kerry Council in southwest Ireland passed a measure on Monday that allows rural drivers to legally drive while under the influence of alcohol. The council voted 5-3 – with 12 absent and seven abstaining – to issue special permits to individuals who live in rural areas and wish to drive home on remote countryside roads after consuming two to three alcoholic beverages. The council will have to rely on Justice Minister Alan Shatter to implement the changes to current drinking and driving laws by issuing special permits.

Councilor and County Kerry pub owner Danny Healy-Rae introduced the bill, arguing that citizens driving while intoxicated in rural areas have never killed anyone. He defended the measure by asserting that it would prevent loneliness and reduce the risk of suicides among those who live in Ireland’s back-country.

“A lot of these people are living in isolated rural areas where there’s no public transport of any kind, and they end up at home looking at the four walls, night in and night out, because they don’t want to take the risk of losing their license,” Healy-Rae told The Journal.ie.

What raised strong doubts in my mind was the bizarre vote. The vote was 5 to 3 with 12 absent and 7 abstaining. That would make it a 27 seat panel that saw a key issue narrowly voted by 8 members. These folks would make the U.S. House of Representatives look like a pillar of rectitude.

To address our suspicious, we may have to arrange a research trip to County Kerry. We'll need a couple of rehearsal sessions first.