Richard III, for the Second Time 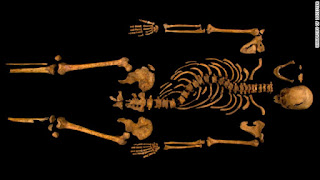 On this day in 2013, this blog is posting about King Richard III for the second time. It was just about six months ago that the first story was published. You can read that one here if you missed it the first time around.

Since then not much has changed, at least not for the King. He's still dead. But they have been poking around his bones ever since they dug him up from beneath a car park. (That's a parking lot for those of us who speak English, er, American.) And what they discovered was that the bones actually belonged to the King. A little DNA detective work confirmed what they already suspected; he was related to Michael Ibsen, a Canadian cabinetmaker.

Ibsen himself was a little taken aback by the news since he didn't think they could prove he was related to Richard and therefore couldn't be held responsible for funeral costs. I think Mike is off the hook, but you never know nowadays. Money is tight right now and he would have to make a lot of cabinets to raise the dough to pay for raising his dead relative.

So the proof is positive, and they learned a lot about the old King. At least about how he died anyway. Just as reported back then, someone on the battleground at Bosworth Field in 1485 gave Richard a mind expanding experience and he couldn't endure the strain. (All of this is explained, and there is some really cool, gory pictures at the link above if you are as ghoulish as I am.)

As for me, I gained a lot of respect for Richie. Anyone who will still go into battle himself instead of sending a drone, has some set of...bones. As you can see from the picture above, he had some significant spinal  problems that might have kept him out of the military draft if there had been one. 4-F for sure at my draft board.

So here's a great video that explains the whole thing in a way that you might find interesting. The King is dead, long live the King's bones.

Hat tip to Jim Franzen for finding the video.