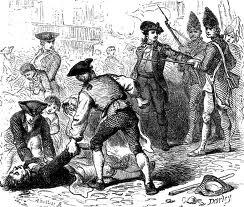 On this day in 1770, a few ticked off Boston colonialists wandered down to the Customs House to protest their taxes. They thought they were getting screwed without the benefit of having their own representative to do the screwing.

Actually, it was on "this night in history" since they waited until it got dark before going there and the place was closed. The only employee of the joint still working at that hour was a lone British sentry who didn't seem equipped to handle their complaints. So, in frustration, they began to throw snowballs at him. Oh, snowball fights are all in good fun until someone decides to toss a few rocks instead. And quite a few of them did just that.

It seems that a few of the protesters were ticked off at more than just tax levels because the fight was really just a continuation of a brawl that started down by the wharf a few days prior when some of the king's soldiers tried to get some part time work there. Although the local guys already working there forgot to form a dockworkers union first, they still had some non-union thugs on hand to control the local supply of labor.

The soldiers called for reinforcements, and after they were joined by about forty more of their buddies, the whole thing escalated into a thug-fest.  Their colonel, a certain William Dalrymple, saw that the whole situation had the potential to get totally out of hand so he confined his men to their barracks for a few days to let the emotional fire go out. Unfortunately, it just simmered for a few day before the snowball incident got it going again.

Anyway, back at the Custom House the lone civil employee was soon joined by seven more soldiers, a corporal and a captain named Tom Preston. Tom told the soldiers to fix bayonets to scare the mob, and the mob responded by taunting them to dare to shoot them. One clumsy oaf named Hugh Montgomery slipped on the ice and fell. His rifle fired as a result and all hell broke loose.

Crispus Attucks, one of the first hyphenated Americans (he was African-Indian), was killed (some say first) along with five of his buddies. A few more were wounded and the whole thing went went south from there.

A few centuries later, these eight guys were said to be the first casualties of the American Revolution. The whole event was called the Boston Massacre. And although no one knows for sure, it's said that Crispus had his name entered into a cracker naming contest for a large bakery. Apparently he lost, but in the war, the colonials won in the end with a little help from the French.

The moral of the story is: don't throw snowballs at clumsy soldiers unless you want to start a new country with your own representatives raising your taxes instead of some inbred royalty from a country across the pond..
Posted by Grant Davies