A Visit From Clem 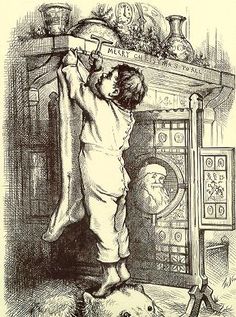 On this day in 1823, a New York publisher issued a poem by a professor of Oriental and Greek literature.

Now, if that wasn't enough to scare most people off, the guy was also a clergyman. Several people who knew poetry told the publisher it was a terrible waste of paper and ink. Such a little trifle as Clem's poem wouldn't be remembered days later let alone years later.

But this flimsy verse which began "Twas the Night Before Christmas...." tended to hang on. And, after its author, Clement Clark Moore, died it was illustrated with drawings by Thomas Nast. Now it really took off. Not only did we know the legend of Santa, now we knew what he looked like.

To celebrate the birth of a classic, have an eggnog or two. Tell the red-faced guy, with a beard, on the next stool he can make extra Christmas money betting people they don't know the real name of the poem. ("A visit from St. Nicholas".)