Nothing More than a Poem 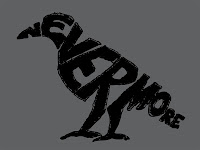 On this day in 1845, a very troubled man had his very troubled poem published in the New York Evening Mirror, a very troubled newspaper. In fact, he was employed by the paper at the time but left that job within the next month, perhaps because he was paid only $9 for the effort. It made him famous but he may have preferred more money at the time. Since those are only my speculations, and I'm too lazy to do the research to find out why he left, you can be sure they will never end up in any credible account of his life.

The poem was of course, The Raven. And the poe was Edgar Allen Poet. (Based on that line alone, he wasn't the only writer with problems.) Anyway, the poem was a hit at the time and seems to be doing fairly well even 168 years later so, all in all, it was worth more than a measly 9 bucks.

Poe had a lot of well documented problems, and if you want to be as depressed as he seemed, you can look them up yourself. I don't want to be the one to drive anyone to drink since it might discourage them from driving me somewhere so I can have a drink.

But I will mention a few because they seem to have influenced many of his poems and stories. In addition to his drinking problem, Poe had a few problems with women. The latter almost certainly the result of the former. He failed at his goal of marrying a few different Sarahs, Sarah Elmira Royster, and Sarah Helen Whitman. And while he was married he was embroiled in scandals involving a few different women, Frances Sargent Osgood and Elizabeth F. Ellet. The scandals, it seemed, were a significant cause of his wife's health problems.

Oh, did I forget to mention his wife? Well, Poe seems to have had a peculiar interest in younger women, um, girls actually, since when he married Virginia Eliza Clemm in 1835 she was only thirteen years old. He was twenty-seven, and she was his first cousin. Today, either of those things might land a poet in a quiet place to write, with bars. Poe, it seemed, liked bars, but probably not the iron variety.

There is only one authenticated image of Virginia known to exist, the one on the right. If she looks a little lifeless it may be because it was painted after she was already dead. The artist used her possibly still warm body as a model a few hours after she died. There doesn't seem to be much in Poe's life that wasn't bizarre, including many of his stories, so a picture of a corpse fits right in.

To celebrate this day, gather some friends and visit The Annabel Lee in Baltimore so you can root for the Ravens to win the Super Bowl next weekend. But after putting in your drink order, when the waitress asks you if she can bring you something else, just answer as Edgar might have, "This it is, and nothing more."
Posted by Grant Davies