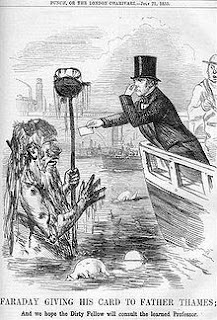 On this day in 1858, things were starting to warm up in London. In fact, before the hot and dry spell was over people could be overheard complaining, "Blimey guvneh! this place really stinks!"

But it wasn't the weather that was so stinky; it was the whole city. The Thames had pretty much stopped moving, and if it wasn't apparent to the less observant before then, it was odoriferously clear now that the whole river was nothing more than a gigantic stopped-up toilet.

The drop in the water level had caused the human waste (and almost every other horrible thing one can imagine that had been poured into the river for eons) to begin to accumulate on the banks and the resulting stench was so bad that no one could escape it.

Oddly enough, it was a side effect of one of the best inventions of all time, the flush toilet, that set the horrific chain of events in motion, or lack thereof, as the case may be. And it's more than a little ironic that one of the main purposes of the invention was to make the unpleasant odors of the necessary act less smelly, not more.

In 1858, an already totally inadequate and literally sickening system for removing human poo was overwhelmed by the relatively sudden popularity of the new flushing device, and when the heat wave hit it finally became apparent to the dimwits in Parliament that there was a problem. That same august body had previously rejected the testimony of a doctor named John Snow, who had shown them scientific evidence that untold numbers of people were dying of Cholera because of the bad water, not the smells that emanated from it. Basically, people were, in effect, drinking from the cesspit. (Snow is now one of the most celebrated scientists of that century, but he was unheralded at the time. More about him in the future.)

Unfortunately, the stink was so bad that Parliament was unable to meet to discuss it even though they tried blocking the windows with curtains soaked in chloride of lime, which didn't help at all.

Actually, nothing anyone tried helped. Except the rains, and when they finally came and washed the immediate problem away, a silver lining emerged from the green cloud. Someone wised up and hired a guy named Joseph  Bazalgette, an engineer, to implement a plan that was conceived of ten years earlier to completely redo the sewer system. Better late than never.

So remember, if you have to hold your nose to vote for people to represent you in government, you're likely to get a crappy outcome when it comes to sniffing out problems.
Posted by Grant Davies