Don't Get Your Knickerbockers in a Bunch 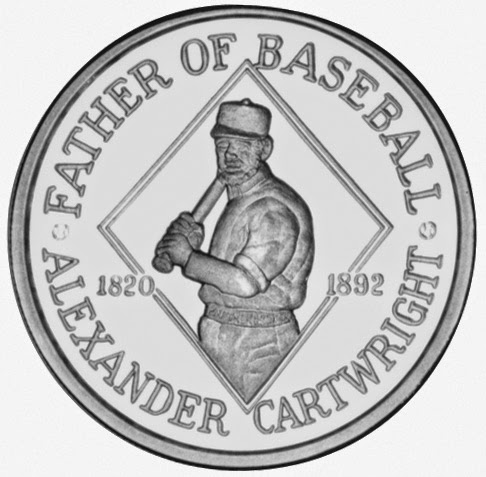 On this day (-2) in 1851, the N.Y. Knickerbockers Baseball Club, which had only been organized as America's first ball club just 5 years earlier, decided to try yet another new innovation. Perhaps inspired by the sight of returning veterans of the Mexican War, Alexander Cartwright, the father of baseball, thought the thing that would build team spirit was a uniform.

So, he outfitted the Knickerbockers in "breeches, shirts and caps" of blue and white. That historical notation has caused an interesting but erroneous myth - that the "breeches" were short pants or "knickers" which led to the word "knickbockers" (a word closely associated with New York...except in certain 4th quarters).

The theory may be somewhat inverted. The first breeches for the team were long pants which they probably "bloused" inside their high sox (thus giving the illusion of short pants). But everybody knows the name knickerbocker became associated with New York because of Washington Irving's spoof - "A History of New York." When he published it in 1809, he used the pseudonym - "Diedrich Knickerbocker." The book was so funny (imagine someone making history funny) it became an instant hit and knickerbocker became synonymous with New York. (Irving later wrote about a guy name Rip Van Winkle, and about a Headless Horseman...but nobody read that stuff.)

History does not record where Cartwright bought the uniforms but folklore says the team's record improved dramatically.