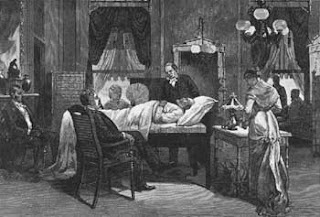 On this day (+7) in 1862, a Lieutenant Colonel in the US army fought his first battle in the poorly named Civil War, which has very little to do with this story except that the outcome propelled the Colonel into a Generalship and ultimately the Presidency. Our story today has more to do with a guy named Doctor Bliss. Oh yes, he was a doctor, but his first name was also Doctor. I know, ya can't make this stuff up.

The future President's name was James A. Garfield, but if you are like most folks you know very little about him. In Mrs. Speck's fifth grade class you might have learned that he was assassinated, but like a lot of other things in her class, that information was incorrect. You might also have learned that the guy who killed him was an insaniac named Charles Guiteau, but like the first part, that also was incorrect.

The part about Charlie being insane was correct. In an earlier story on this site he was described by the author as "hearing voices without the benefit of a Walkman." And he shot the President for sure, but he didn't kill him. That achievement should be correctly attributed to our very own Dr. Doctor.

And speaking of crazy, without being appointed by anyone in particular, and certainly no one with the authority to do so, he injected himself into the situation. He took over by the force of his own authoritative pretense. He then fired all the other doctors who were summoned or otherwise showed up following Guiteau's target practice. And you thought incompetence in government was a recent development?

Bliss was originally summoned to the scene of the crime by none other than Robert Todd Lincoln, a member of Garfield's cabinet, who had been waiting at the train station where the shooting took place. Lincoln just happened to be the son of another President who had been shot, and he had been in the room when his father was abused by incompetent boobs who thought it would be helpful to stick objects into his brain to locate the piece of lead that caused his sudden dullness. Robert remembered that Bliss was one of those boobs, so he naturally thought he was a good candidate to screw this situation up as well. It helps to have experience in these matters.

Anyway, Bliss was as arrogant as he was ignorant, so he decided to dismiss the widespread wisdom of most of the European medical community on the subject of bacteria and infection of wounds. Guys like Bliss had decided that there was no such thing as germs since they couldn't see them. (Joseph Lister would have turned over in his grave except that he was still quite alive.)

It took about two months of continual torture from Bliss, who regularly stuck various contaminated objects into the President's wound, before he succeeded in killing the patient who might very well  have survived otherwise. (And what on earth would the country have done without ole Chet Arthur ascending to the highest position in the land?)

So in the end, crazy Charlie Guiteau only succeeded in getting himself hung by his neck until the voices in his head stopped telling him to shoot the President. And Bliss only succeeded in poking Garfield to death before he submitted a bill to Congress for the service of doing so. It was a huge bill, and for once the Congress did the right thing and refused to pay it. They did agree to pay him a lesser sum (which he refused, in the ultimate act of arrogance) so don't go wild giving them too much credit.

To commemorate the events, enroll in a history course at your local community college. But just make sure the professor isn't the same Mrs. Speck who taught you all the wrong things back in the fifth grade. History does have a way of repeating itself you know.

Information found in this story was mostly gathered from the excellent book on the subject, "Destiny of the Republic" by Candice Millard.
Posted by Grant Davies