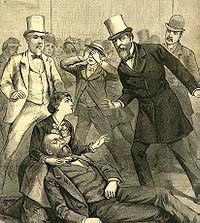 On this day in 1881, a government worker was hurrying through the Washington railway station hoping to catch a train that would take him to a July 4th holiday with his family on the Jersey shore.  Halfway through the waiting room he was struck by 2 bullets.


His name was James Garfield and he happened to be President of the U.S.  (Some feel he may have been one of the most brilliant men ever elected to that office.  He could write Greek with his left hand and simultaneously write Latin with his right while holding a normal conversation.)


The man who fired the shots this Saturday morning was a disappointed office-seeker named Charles Guiteau.  He had hoped to become consul-general in Paris.  Guiteau was probably board certifiable.  He claimed to speak to God and was a member of the radical "free love" movement.  He said he wrote the speech that had elected Garfield - yet no one, not even Guiteau had ever delivered the speech. Garfield, who had hoped to reform the spoils system, interviewed Guiteau shortly after the inauguration in 1881.  Sensing that this was a guy who heard voices without a Walkman, Garfield sent him to the State Dept.  No dopes at the time, the State Dept. sent him back to the White House.  For the next 2 months these two arms of government played appointment ping-pong with Guiteau.  This lasted 2 months until Guiteau received a heavenly message to "kill Garfield."


Thus, Garfield found himself shot in the shoulder and the lower-back (median right).  Guiteau was arrested leaving the Potomac and Baltimore R.R. Station.  He was trying to get into a cab which he had arranged to take him to the authorities (and keep him from the irate mobs - there were actually only 4 elderly women, a bootblack, a fruit stand operator and, of course, the Secretary of State.......er and of course the Secretary of War - Robert Todd Lincoln - who has the unique record of having been present at every Presidential Assassination in American history except JFK.)  (P.S. He’s buried next to JFK at Arlington.)


Garfield believed he was doomed and told the doctors "thank you!  But I am dead."  He may have been the President but they knew he was no doctor.  So for the next 2 months, doctors alternated one kind of surgery to find the bullet (unsuccessful) with another kind of surgery to calm infections caused by the former surgery.  After weeks of such care they managed to give him toxic blood poisoning and a temperature of 109.4. Not wanting to tie up the skills of these  important physicians any further Garfield reverted to his original estimate and "died."

To mark the occasion explain to "she who must be obeyed" that it is not drinking the "see-throughs" that makes one sick - it's all that poking about for the olives.