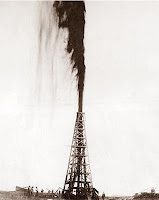 On this day (+1) in 1901, the folks of Beaumont Texas went about their business (mostly agriculture) while they snickered about some boys, backed by Eastern money, trying to drill for oil on a small hill south of town.  The reason they snickered was that at least four other teams had come up dry in the same spot.

The drilling crew was beginning to think like the cynical locals.  After weeks of frustrating drilling they were down only 1000 feet.  And once again the drill froze up.  They pulled it out, cleaned it and were about to give it one more shot whey they heard a noise.

It sounded like a train - - but there was no train. Suddenly from the drill pipe came mud, then water, then rock fragments and then oil.  Oh boy, was there oil.  In a roar that was heard for miles a geyser of oil shot nearly 100 feet in the air.  And, it kept spouting (nearly a million barrels in ten days) as the surprised and lucky finders wondered how to get control.  (They finally did.)

The hill was called Spindletop.  But, so many con men showed up in the next few months to take advantage of the boom that locals nicknamed the area "Swindle top."  And the vast supply drove oil prices so low and the pollution drove drinking water prices so high; that two years later it took over 200 barrels of oil to buy just one barrel of water.

To mark the event, tell someone you like about an amazing opportunity.  But make sure you know the price of what's in the glass.