The NIGHTingale of Firsts 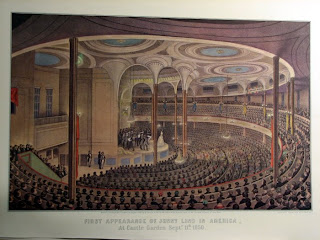 On this day in 1850, the American tradition of celebrity hysteria was born.  And who else would you expect to be the mid-wife at the event - none other than Phineas Taylor Barnum.

The event was the New York debut of a certain Johanna Goldschmidt but perhaps you know her by the name that most ga-ga New Yorkers knew her by - Jenny Lind.  Barnum had imported the soprano from Europe - but - hold your Beatle wig folks - he thought he needed a "gimmick" to hype things.

First he picked a nick-name/image.  He called her "the Swedish Nightingale."  Then he announced that for her American tour, they would have to outfit a special railroad car for her special needs.  (First private railroad car in history.)  He then planted stories that she would occasionally appear at the window, on a balcony, or in the lobby of her hotel.  The result was an incredible 30,000 people surrounding the hotel.  (First call out of the police to protect a celebrity.)

Barnum then announced that the tickets for her appearance at Castle Clinton, on the southern most tip of Manhattan, was oversubscribed.  So, he announced, in true Barnum fashion, that he would auction off the 25¢ tickets.  On the first bid a man who was either love struck or a Barnum plant paid $225 for the 25¢ ticket.  His name was John Genin.  The crowd went wild and began bidding frantically for tickets.  (First
ticket scalping - an old NYC tradition).  When the auction was over, many of the successful bidders re-offered their tickets at a premium to those who missed the auction.  (Second ticket scalping - another tradition.)

Having caused more than enough headlines and hysteria, on this night, Barnum escorted his star to the glittering candlelit stage of Castle Clinton and into celebrity history.

The gala wedding day of our little girl is now part of history. It was terrific! The event took place in our yard. The weather was perfect, the service was cheeky, the food and servers were outstanding, and most of all our bride was gorgeous. Our family is blessed to have such a great new son join us. God is good. Thanks for all the well wishes and expressions of congratulations.  I hope you have enjoyed the posts by Art Cashin while we have been engaged in the planning and celebrating.