He Made Him an Offer He Could Refuse 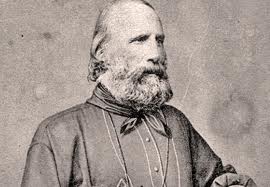 On this day (+1) in 1861, President  Abraham Lincoln made one of the most remarkable offers in American history.  The Civil War had begun and already Lincoln had begun to doubt the will and skill of his generals.  In fact, he had become so frustrated with his commanding general's apparent hesitancy that at one point he
sent one of the generals a message:  "If you are not going to use my army, do you mind if I borrow it?"

So, Lincoln racked his brain trying to think of a charismatic aggressive military man to lead his troops.  Then he thought about a guy who had made a big splash six years before, talking about his military exploits as he toured the speech circuit.  The papers had loved him.

Lincoln sent out feelers to see if this general would consider taking command of the Union Army.  Yet, although his name began with a "G" it was not Grant.  Rather it was Giuseppe Garibaldi, the Italian Freedom Fighter, who had added to his image by leading rebel armies in South America just a decade before.

According to published reports, Garibaldi sent word that he would only consider the post if Lincoln abolished slavery.  Lincoln reportedly feared that to do so would take away from the stated goal of the war which was to preserve the Union.  So the negotiations fell apart.

If things had gone otherwise, Groucho Marx might have spent a decade saying --"We don't want you to go home empty handed -- so we'll give you $50 if you can tell us "Who's buried in Garibaldi's Tomb?"