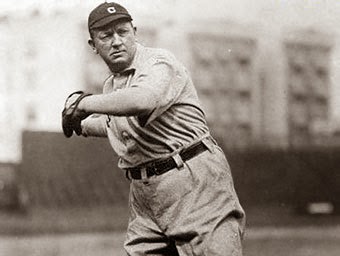 On this day in 1904, a 37 year-old pitcher for the Boston Americans added yet one more star to an amazing career. He retired all 27 of the Philadelphia Phillies in a row - - thus pitching the first "perfect" game in major league history.

That would have been enough to earn him a place in baseball memory. But he had done so much more. In the prior year's "practice World Series" he had out shown a hall of fame list that included Honus Wagner and a raft of others. In his career he had won over 510 games having pitched in nearly 900. His record got him a quick selection into the first Hall of Fame induction.

His mom called him by his given name Denton True. But his teammates, the fans and the sportswriters gave him a nickname based on his high hard right-hand delivery. As one bewildered batter muttered - - it came down like a cyclone. So Denton True Young become "Cyclone Young" - - At least for a week or two.

Then he became "Cy Young" and he became a legend.