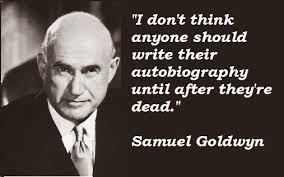 On this day in 1940, one of the great movie moguls (and manglers of the English language) added one more whacky phrase to his murdering of the stepmother tongue. He was, of course, Samuel Goldwyn, a Polish immigrant who made some of the great movies of all time.

He was the Yogi Berra and Casey Stengel of his day, pouring out tons of phrases that caused intellectual whiplash. (My favorite, "Anyone who goes to see a psychiatrist should have his head examined.") Anyway, on this day, as his aides presented a proposal for a joint venture, Goldwyn thought for a minute than said - - "You can include me out".

If Goldwyn had survived until now, he might have become the global spokesman for the recent crisis. From bank lending officers to consumers in the holiday shopping malls, everybody seems to be saying - - include me out.

We are also thankful to Mr Cashin for carrying the load recently while the editor dealt with a health issue. Semi-regular, and dreadfully written, stories from the editor will resume shortly.
Posted by Grant Davies