Prosperity is Always Just a Few Greenbacks Away 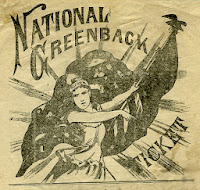 On this day in 1876, a group of influential, yet irate, Americans met in Indianapolis. Their primary purpose was to send a message to Washington on how to get the economy moving again.

America at the time was going through a difficult and unusual period. Several months earlier, the stock market had begun to plunge violently. Soon there were layoffs and business closings and the economy was having a tough time getting back in gear. And for months now, strange things were happening, the money supply seemed not to be growing, real estate values were stagnant to slipping, and commodity prices were heading lower. (How unusual.)

So this group decided that what was needed was re-inflation (put more money in everyone's hands, you see). The method they proposed was to issue more and more money. Cynics called them "The Greenback Party." And on this day, the Greenbacks challenged Washington by running an independent for President of the United States. His name was Peter Cooper. He lost but several associate whackos were elected to Congress.

To celebrate stop by the "Printing Press Lounge." (It's down the block from the Fed.) Tell the bartender to open the tap and just keep pouring it out till you say stop. Reassure the guy next to you (while you can still talk) that now we have more enlightened people in Washington. Try not to spill your drink if he falls off the stool laughing.