Theoretically, It's a Conspiracy 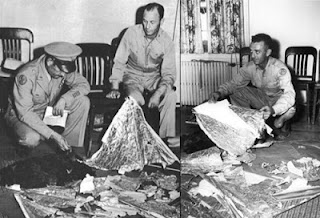 On this day, the American people are making plans to mark a recent day when their leaders were caught red-handed in multiple lies concerning spying secrets. And since there is more than one person who agreed to lie about things, it qualifies as a conspiracy. At least that's my theory.

I'll probably be writing about that history 50 years from now. But only if I live to 113, which seemed more likely before the government took over responsibility for my healthcare. However, that's just a theory, too.

So let's take a look at what happened on this day in 1997. Back then, preparations were in the "hectic" mode for an extravagant celebration of the 50th anniversary of the uncovering of a different government cover-up.

It was only about a week before the gathering was to be held that the government decided it didn't like being uncovered, so they were making their own preparations. They decided/conspired to throw some cold water on the participants of the upcoming meeting.

Anyway, today was the day they released their newest comprehensive report (231 pages) on the subject. The paper was titled "The Roswell Report, Case Closed." Roswell of course was the nearest town to the events that inspired the whole mess. (On a per capita basis it may be one of the most well known places on the continent.) The previous report, a mere 1000 pager released in 1994, had worked so well in discrediting the conspiracy theorists they went back to the same tactic. Same results, what a shock. So what was the big conspiracy hiding? Why, nothing less than little green men! Or maybe gray men, but you get the idea.

In July, 1947, a rancher had found multiple metallic objects, indicative of some kind of serious aerial crash, scattered across parts of his land. Of course, he called in an expert to study the wreckage. The expert, the local sheriff, sensed that he was in the deep end of the science pool without any flippers and called in the US Air Force. They might not have been the best group to call, but heck, they were right there in the neighborhood and it gave the sheriff a good punting target. (Don't try mixing your metaphors at home, kids; I'm a professional writer on a closed track.)

Anyway, it didn't take that group long to declare that they had recovered what remained of a "flying disk." Later the disk became a weather balloon and the gray alien spacemen bodies that were theoretically/allegedly recovered had become test dummies from recent parachute tests. And that's how conspiracy theories get started. All you need is some mixed up stories and a little secrecy to make conspiratorial history.

But there is a bright side, an entire industry sprang up in its wake. It put the town on the map and inspired annual UFOlogist conventions. Countless TV shows, movies and books have been produced. Not to mention the millions of alien toys and memorabilia that have been sold. So it looks like in some cases government actually can stimulate business.

To celebrate the day...oh, never mind. The 50th anniversary celebration is what got this whole story started in the first place.
Posted by Grant Davies