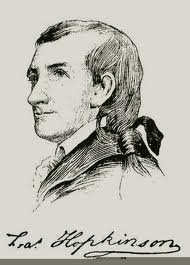 On this day in 1777, the Continental Congress adopted the concept of a flag with 13 stars and 13 stripes. It had been designed by Francis Hopkinson, a designer of naval pennants (who apparently was never paid by the government for his efforts).

Many decades later a grand nephew of Betsey Ross would claim that she had designed and sewn the first flag but as popular as the theory became there are no records of an order, delivery or payment.

Hopkinson's case is reinforced by records that indicate that a certain G. Washington and the Board of War thought Hopkinson's design was a naval pennant. They requested a new standard or "colors" for the Army. (P.S. Gen. G. Washington got his colors at war's end - 1783 - no records show what they looked like.)

Anyway, proving that the Founding Fathers were good at Constitutions but as bad as their current heirs at loopholes, the flag law was vague. Soon there were flags with vertical stripes and even gold stars (quite popular into the civil war). And, like today's accountants they found fudging numbers didn't hurt. The stars and stripes mentioned in the Star Spangled Banner flew over Fort McHenry with 15 stripes and 15 stars.

Not to worry though, your government would not let a problem linger - the flag was finally defined - in 1959.

To celebrate Flag Day have a couple of shots at the Old Glory Lounge. But remember to stop before you see stars and be sure not to drive after, or you may end up wearing stripes.