Save the Endangered Left-handed Snail Darter! 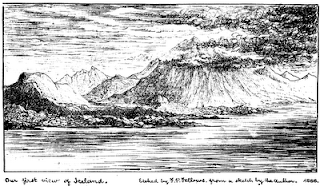 On this day (+1) in 1783, weeks of rumbling beneath Mt. Skaptar, a volcano in southern Iceland, ended with a roar. And what a roar it was. Across a line of over 10 miles, the earth split as in an earthquake in a movie. But instead of leaving a small canyon or valley, the rift in the earth poured forth massive amounts of molten lava and hazy blue gases.


Over the next two months, it spewed out enough molten stuff to cover the entire island of Manhattan with a lava cover a mile high. Looking for a place to go, the lava filled up riverbeds, harbors, seabeds and it melted centuries- old glaciers. Thousands of people were either burned to death by the lava or drowned in the floods it caused. The lava alone would have caused this to be rated one of history's great calamities. But then there was the haze.
The heavy, blue, sulfur-smelling haze spewed forth from the fissure and hung like a low cloud that grew and grew until it spread from Iceland southward to Gibraltar. And it hung there. And as it did, there were reports of cattle dying in the field because their flesh had begun to eat them alive. (Now where did I hear that before?) Some humans had a similar experience. Many more developed sudden open sores, sudden loss of hair and bleeding gums, finally dying in the streets.

Then things started to get bad. Leaves fell off the trees and plants. Birds, rabbits and other wildlife began to die, often rotting as they fell. Then the fish began to die, rising to the surface, often partially decomposed. (I hope you're not reading this at breakfast.) Now there was no food and those remaining people and animals began to starve. Thankfully, the winds began to shift, the volcano began to still and the dying began to stop....finally!

To mark the day, sympathize with someone from the "Save the Endangered Left-handed Snail Darter Club" and hoist a spring water and something natural, while you note the latest study implies it must be man that upsets nature's gentle balance.