It seems there at least as many versions of the story of Saint Patrick as there are story tellers. My story can be found here. Art's story appears below. I hope you enjoy both but please don't compare mine to his because I'm sure to lose in that comparison. If you wait to read mine until you have consumed several shots of Jamesons it will have a better chance.
Grant Davies 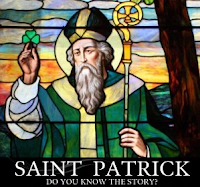 On this day in the year of our Lord 389, there lived a foin broth of a lad who was.... dependin' on the boyographer ye read: a Spanish peasant, a French herdschild, a Celt from Bannavem or a Gael from Dumbarton, Scotland. At any rate, at age 16 this lad was kidnapped by pirates and sold to one of the only 2500 Irish kings that were reigning at the time.

He served this King as a swineherd mucking out stys and such. For six years he labored in slavery, poorly fed; often beaten; surrounded by people in strange dress who spoke a language he couldn't understand. Then he discovered that six years of such treatment was equivalent to a parochial school education. So he became a Catholic and escaped to France to become a monk.

Upon becomin' a bishop he mistakenly perceived the French to be a bunch of snail eatin', grape juice drinkin', truffle huntin' toads. He longed for the emerald green fields of God's own land and the special amber holy water found there. He returned to Ireland, which was still under the influence of a
group of heathen English druids and a few nocturnal banshees. Nonetheless, he set about convertin' and baptizin'.

Unfortunately, Patrick was not an MBA and did not know the law of diminishin' returns. So he managed to baptize over 120,000 people, built over 300 churches, chased the snakes out of Ireland, developed the shamrock and established a factory to make pennants carryin’ the slogan "Go Notre
Dame".

To celebrate the life of this fabulous man, sing ye some sad songs, talk ye merrily of battles and take ye a wee nip of somethin' till ye might be seein' da little people.
Posted by Grant Davies