Everything You Thought You Knew About Chris 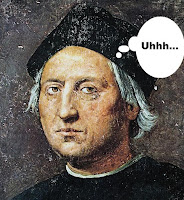 On this day in 1492, Christopher Columbus landed at the Bahamas, believing that he had landed in the islands off Japan. And so history is indebted to a man with a flawed theory who set out on a venture where he didn't know  where he was going, suffered sharp losses on the way and didn't know
where he was when he got there. And he did it all on borrowed money. But if Columbus had things confused, folklore has really muddled what happened.

Back in August of 1492 Columbus had set sail from the port of "Palos de Frontera" on the west coast of Spain with a squadron of three ships to seek the riches of the East.

Error #1 - Columbus headed for a new land. (Actually, he thought he was sailing to China or Japan.)

Error #2 - he was a mighty sailor. (In two earlier launches some of the ships he selected leaked so badly they had to rush back to port and were replaced.)

Anyway, as we all know, the advisors to Ferdinand and Isabella warned their collective royalness that Columbus would sail off the edge of the earth. That's error #3 - actually, they thought Columbus had underestimated the size of the globe and thus would run out of fresh water before he could reach China. Perversely, today's computers indicate the negative advisors were very accurate while Columbus was off by many thousands of miles. Luckily, the unexpected "New World" and its fresh water stood in the way.

So! You say - "So what! Mr. Smarty Pants!" Even if he was not who he seemed to be, nor was much of a sailor, landed in the wrong place and miscalculated much of the way - the great drama was that he did it - and on borrowed money at that. (Op. Cit. Queen's necklace fable.)

Well, despite what your version of Sister Herman Joseph told you that's error #4 - the Queen never hit the hock shop with the jewels. What had really delayed the trip for nine month's was greed - Columbus'. In his employment contract he demanded: 10% of whatever he found, a Knighthood, an
Admiral's title and a Viceroy's title (both to be hereditary) and 10% of the profits on all naval imports thereafter.

When F and I turned him down, he had tried for the same deal at various palaces around Europe. Finally, an advisor convinced Isabella that actuarially Columbus had a good shot of dying on this or some subsequent voyages, so the Queen signed the deal.

To celebrate make note of some valuable discovery you've recently made. Then drop a hefty employment contract on the boss's desk - but don't insist on an Admiralcy - you'll probably look greedy.