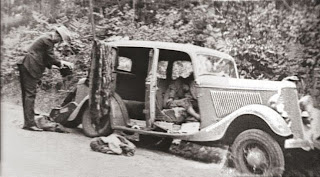 On this day (+1) in 1934, a young couple laughed as they drove in the early morning daylight near Arcadia, Louisiana. They had just picked up something to eat and were munching and laughing as they sped through the brightening sunrise. As they pulled around a curve, they were met by a surprise.

The surprise was delivered by a Texas Ranger named Frank Hamer and a group of Louisiana troopers and local cops. Their method of delivery was 10 shotguns, 5 Thompson sub machine guns, and 2 Browning Automatic rifles. A bit much for some post-prom sportsters you might think.

Well it wasn't "post-prom" and the "sportsters" in the car were a couple named Bonnie and Clyde. And, fearing that there might be a video-cam van behind the fugitives….Ranger Hamer ordered his boys to open fire rather than stop, debate or beat the occupants of the car. So they proceeded to pump over 160 bullets into said car. Many apparently struck the car's occupants….Bonnie's corpse was said to have half an uneaten sandwich in its mouth.

When word that Hamer and his crew had killed the famous "Bonnie & Clyde" began to filter out, crowds from the area rushed to the scene. Of course, they were better behaved than today's ruffians. These folks simply began by tearing off the bumper, headlights and fenders of the bullet-riddled car. As the car was stripped, the souvenir seekers got more aggressive....some began to cut off locks of Bonnie's hair....finally someone tried to amputate Clyde's "trigger finger" as a trophy. That was a bit too much even for these cops and they closed off the area.

But if Bonnie and Clyde lacked of sympathy at the site of their death; they also lacked sympathy even among their supposed peers. John Dillinger, rather famous in his own right, hearing of the ambush of Bonnie and Clyde was reported to say --- "Hell, they were just kill-crazy punks and clodhoppers. They gave us decent bank robbers a bad name!"

What a shame Dillinger never lived to see what a well lobbied Congress would do to the Bailouts of 2008/2009. By them - Dillinger was a dilettante!!