Now That Winter is Over... 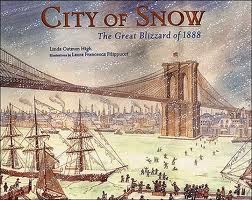 On this day in 1888, America was moving through what looked like just another day. There was a lot of talk about trading partners and religion. The partisanship in Washington looked like it could turn very ugly. And the stock market was confused by the whole thing and rather nervous. But that was years ago.

Anyway, spring was in the air in New York City and the pundits said the economic problems probably were months off. But on this day the temperature began to drop sharply on the East Coast where most folks lived. And in a matter of hours, the winds whipped up and winter weather was back. The cold snap collided with a coastal rainstorm.

It started as flurries. Then in growing, biting winds the snow began to fall. The meteorological oddity became a blizzard. Over 40 inches of snow swirled into 9-foot drifts as phone lines fell. More than 400 people died in the streets. The city ground to a halt. All contact beyond 5 miles was lost.

But it was the age of American ingenuity. So police, hospitals, (and brokers) sent messages by the new under ocean cable to London. From there they were retransmitted by another underwater cable to Boston. Thus, help was sent to a New York - - paralyzed by The Blizzard of `88.

Here's a typical paragraph from The New York Times the day after the storm: "Before the day had well advanced, every horse-car and elevated railroad train in the city had stopped running; the streets were almost impassable to men or horses by reason of the huge masses of drifting snow; the electric wires- telegraph and telephone --connecting spots in the city or opening communication with places
outside were nearly all broken; hardly a train was out from the city or came into it during the entire day; the mails were stopped, and every variety of business dependent on motion or locomotion was
stopped."

Later the reporter would note that nearly 50,000 people had been stranded in stalled elevated trains.
Imagine snow and low temperatures and ultimately a great blizzard near the Ides of March. We're sure that never happened again, did it Grasshopper?

Actually it did, and does with rather annoying frequency. There have been scores of great (and usually unexpected) storms in New York and on the East Coast around the Ides of March. One of the worst within my memory was the blizzard of 1993. It ranged across the entire East Coast, from
Georgia to Maine. Airports in some locations were closed by up to four days, roofs collapsed under the weight of snow and hundreds of people died. Even with the wonder of weather satellites, it's nature that calls the tune.

This weekend, in Manhattan, we are due for a very pesky rainstorm. If the temperature were 10 or 15 degrees lower, we might be having 15 to 20 inches of snow. It apparently was not just Julius Caesar who should "beware of the Ides of March."  Pass the rock salt, please!