The Pony Express - A Risky Business 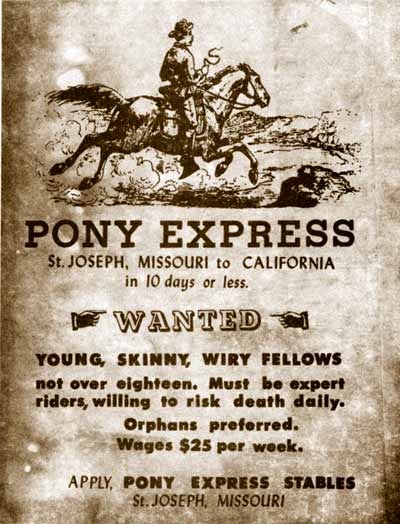 On this day in 1860, a group of entrepreneurs launched their dream. And what a dream it was! They were in the telecommunications business. The nation was suddenly bi-coastal. At both oceans America was thriving. And these guys knew that communications was the key to the future

So, on this day, the first Pony Express rider left St. Joseph, Mo. on his leg of the 1966 mile route to Sacramento California. The cost was $5 per 1/2 ounce (it was later cut to a buck). Ten days later the mail arrived in the Golden State (to the amazement of nearly everyone).

They promoted the service well-very well. The image of a rider fighting off storms, Indians and various animals while rushing your mail was an instant hit. It was a depiction of pioneer life like none before or after. America bought it then and bought it now. The Pony Express thrives to this day in image and movie retelling as the epitome of American survival. Even their recruiting posters smacked of the romance and risk inherent in the endeavor. One example read: "Wanted: Young, skinny, wiry fellows not over 18. Must be expert riders willing to risk death daily. Orphans preferred."

Unfortunately, while it sold as an image, it failed to sell as a service. While the image has lasted nearly a century and a half as a national standard the company lasted only 18 months as a business. Even though the Pony Express used tried and true methods that had been used by Ben Franklin almost 100 years before (and by Darius of Persia nearly 2,000 years before that), the situation failed. What they missed in their calculations was something called the telegraph. So in less than 18 months they were out of business.