When Spying is Suspected, Call in the FBI 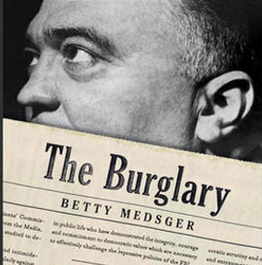 On this day (-4) in 1971, eight amateur burglars broke into an office in a small town in Pennsylvania and stole a bunch of papers out of the file cabinets. Was this a case of industrial spying or sabotage? Was it a lawyer's office with evidence being stolen in some mafia related court case? Were the papers sensitive dossiers on people who didn't want their private lives surveilled?

Surely, if it was one of those things, the law enforcement professionals would be on the case immediately and quickly nab these first time perpetrators. I mean, if someone was being spied upon, or if dossiers were being kept on private citizens, wouldn't you call in the best detectives you could find? Even perhaps the FBI?

Well, as it turns out the FBI was notified as soon as the crime was discovered. In fact, they were the first on the scene. And in fact, they discovered the crime before anyone else knew about it. Those FBI agents are really sharp, you might be thinking. But for crack investigators like them, this one was easy. You see, it was their own offices that had been burgled and their own papers that were carried away. That kind of crime tends to top the "I'm really, really pissed off about this" list that the FBI keeps in those offices. So you could reasonably assume the perps were caught in a flash and the country was saved from some spy ring of foreign bad guys. Um, you would be wrong about that. In fact, they were never caught.

As it turned out, the FBI were the spies and the people they were spying on were American citizens who were also on an FBI list. It was a list of people and organizations who didn't agree with J. Edgar Hoover's political views.

The papers were turned over anonymously to newspapers and members of Congress and the whole criminal enterprise called the FBI came under the first real scrutiny in its history. Hoover died in 1972, before his involvement in the "FBI inside the FBI" could be fully understood. So the burglars weren't the only ones to escape discovery.

But don't worry, ever since these burglars exposed the government's unconstitutional spying the chance of a government agency collecting information on US citizens unlawfully is a thing of the past. They wouldn't dare do that again.

Information for this story was gathered from the book "The Burglary" by Betty Medsger. Her office was not broken into and no files were stolen.
Posted by Grant Davies No comments:

Damocles Almost Got the Point

On this day in 385 B.C. (according to my clay tablets), a man was granted a wish that he later wished he hadn't wished for. This all took place in a place called Syracuse…..which…..this being the B.C. days and all…..not only did not yet have a Carrier Dome; it was not even located in upstate New York. This Syracuse was a colony of the ancient Greeks and was located on the coast of Sicily.

The head guy in Syracuse at the time was a certain "Dionysius." He was the fellow who granted the above-mentioned wish. This was easy for him to do because he ruled all alone without Council or Advisors. The Greeks had a name for such a solitary ruler…..the word was "Tyrant"…..which has taken on a rather negative connotation in recent years…..or so we hear.

Anyway, Dionysius had this associate who kept telling him how lucky he was to be a Tyrant and how great the Tyrant lifestyle must be. After a few years of "Gee, Dion, what a lucky guy you are, I wish I lived like you!"…..Dionysius decided to give his pal a taste of the Tyrant lifestyle business. He put his staff at his pal's disposal. They bathed him…..oiled and scented his body (after a rubdown)…..dressed him in the finest clothes…..and seated him at the head of the table at a very lavish banquet attended by the crème de la crème of Syracuse.

The guest of honor was just getting into the fun of it when he noticed the banquet guests were talking to him but not looking at him. They kept glancing up at the ceiling high above his head. He looked up and saw that Dionysius had placed a huge, razor sharp sword above him and that the sword was hanging (and gently swaying)  from a single horsehair. When he tried to get up, Dionysius had him restrained and said, "My friend, Damocles, how do you enjoy the role of Tyrant?" The point being made, the banquet ended and the phrase "Sword of Damocles" took on a meaning that has lasted for over two thousand four hundred years. It actually has several lessons…..don't envy the other guy.....death or anger may strike at any moment….and playing the Tyrant is not really as rewarding as it may seem and may cost you friends.

To mark the day, drop by "The Razor's Edge Lounge" and tell someone how important it is to stay on the cutting edge. But don't let anyone hold anything over your head.