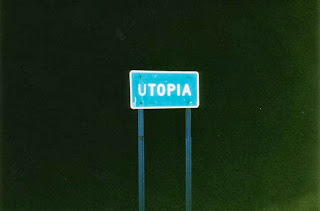 On this day (+3) in 1889, a new school opened in the town of Greeley, Colorado. (More on that town in a moment.) It was a two-year college that sought to train new teachers who were qualified to teach in the government school system. The name of the college was State Normal School but after changing names three more times it became the University of Northern Colorado.

The town of Greeley was named after the guy who inspired it, a certain Horace Greeley. You might remember him from the "Go west young man" lesson we all learned in elementary class on the days we weren't daydreaming about a Utopian life where there was no school and the girl next to us in class thought we were something other than the little dweeb we actually were.

But what most of us weren't taught was that Greeley was a Utopian himself. He helped to found several Utopias which were nothing like what would pass for a perfect place in most peoples eyes. And I'd tell you all sorts of other interesting things about Greeley, except this story is not about him. Maybe on another day.

The person who our story is mainly about was an Egyptian student named Sayyid Qtub. Practically unheard of in this country, Sayyid is known in certain circles very well, but more on that later.

The year was 1948 and the place was New York City. Qtub was traveling through that hotbed of morality on his way to (Utopian) Greeley, Colorado to attend the above named school. As one author* describes it, Qtub was a shy and quiet fellow who was traumatized by the whore houses, drug houses, gin joints, and gambling dens.

So he should have been delighted with the relative difference of the Greeley lifestyle where "Classical concerts, free public lectures, sock hops and potluck suppers were the main entertainment."*  Booze was illegal and virtue was all the rage in Greeley. But Sayyid wasn't happy there either; the place seemed like hell to him. He thought the uncovered legs and hand to hip dancing at the church socials was insanely evil.

What he had to say about American Jazz was even less complimentary. He opined that it was "created by Negroes to satisfy their primitive instincts, their love of noise, and their appetite for sexual arousal."*

Anyway, Sayyid attended school there for only six months before returning to the Middle East where he spent most of his time railing against the depravity of the West. His legacy was in the movement he inspired, something that translates in English to "The Base."

Most of us know it better by it's Arabic translation. It's called al-Qaeda.

*the author is Andrew Carroll. The information for this piece (excepting some background on the school) and all the italicized quotations above were taken exclusively from his excellent book titled Here is Where.
Posted by Grant Davies