The Country Needs a Little Rebellion Every Once in a While 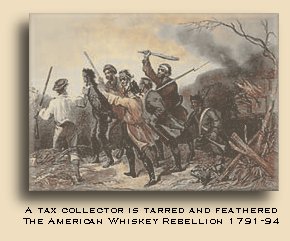 On this day (-1) 219 years ago (that would be August 7, 1794 if you happen to be saddled with a graduate degree in accounting but have no batteries for your calculator), the President of the United States was told by his aides that he had to get focused. They warned him that his popularity was slipping...that many of the people worried that he was trying to expand the government's authority and size...and that much of his problem related to three areas: taxes, exports and access to medication. Finally, they told him most of his trouble may have been stimulated by his political opponents....the Republicans.

In this case, the President was George Washington...the "Republicans" were what they called Jefferson's supporters at the time (they later changed their name to Democrats)...the tax was an excise tax engineered by Alexander Hamilton...the export question dealt with the shipments down the Ohio and Mississippi...and the medication in question was, of course, alcohol...er in this case whiskey. (Now wait...don't scoff...there was no anesthesia yet and the only other means of sterilization was fire..."Sarge, we've got to get that arrow out or Bob will die!" "Okay, pour some whiskey on this knife and give Bob a gulp for the pain.") We understand there also may be non-medicinal uses of whiskey and hope to hear of them someday.

Anyway, back to the story. At this time, from Pittsburgh, PA to Marietta, Ohio, Frontier folk were growing more corn and grain than they, or anyone, could eat. So they decided to sell it. Since there were no roads at the time, they loaded a couple of barges with corn and sent them toward New Orleans. By the time it got there, the small amount that hadn't rotted and was thus sale-able brought almost no value.

Next they tried feeding the corn to hogs and sending the resultant pork in barges to New Orleans. Given the state of refrigeration at the time, the results were about the same. In fact, the only way the barge crews raised enough money to head back north was by selling a few jugs of whiskey to the medicine hungry folks of New Orleans.

Well, at the time the settlers of this region of Western Pennsylvania and Eastern Ohio were mostly of Scottish and Irish descent. In those politically incorrect days, Scots/Irish were assumed to be good at farming (corn/rye/an occasional buh-day-duh), pharmacology (above mentioned miracle drug) and finance (Adam Smith, etc.). Applying their finance skills, they realized a ton of corn took up a lot of space and barge-wise yielded no profit. Hogs raised on said ton of corn took up less space but still yielded no profit. But...a ton of corn or rye made several barrels of medicine which did yield a profit. And since a barge could hold 5 times more condensed corn (whiskey) than dry corn (corn), the leverage was enormous.

Then along came Hamilton's excise tax. He assumed the product was so valuable that producers could easily pass a tax increase along to consumers. (Maybe genius can be crimped by government service.) The initial reaction was so hostile that Hamilton had to develop a formula. The formula forgave small volume producers and punished high volume producers. Since the East Coast was also making money in tobacco and cotton, that left the Ohio Valley crowd to pay the bulk of the tax.

Although the Scots/Irish of the area were good at farming, pharmacology and finance; their political skills were rudimentary at best.  So they began "tarring and feathering" tax collectors. They even burned tax offices and had bonfires of tax forms. (Where are these people when we really need them?)

Sensing that he was slipping in the polls, Washington followed his aides' advice and sent the army to quell this "Whiskey Rebellion." But...Washington (and the U.S.) had no army so he had to beg for help from the militia of four states. When the "army" hit Pittsburgh, they found most of the rebels were over-medicated so to speak.

The two results of the Whiskey Rebellion were: a) the Federal Government could collect taxes; and b) we needed a standing army (to avoid begging).