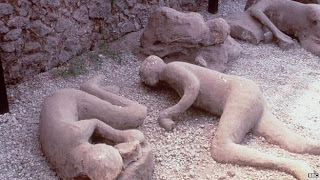 On this day (+2) in 79 A.D.(which would be August 24th if you are an accountant), the Donaldus Trumpati and other Roman "don't-cha-knows" were hanging about, enjoying the summer rays at the 1st Century's version of Martha's Vineyard. (No, not that Martha). It was "the" summer in- place. It was on the Bay of Naples and it was called Herculaneum. A little further along "the shore" was another posh spot called Pompeii (10% discount to senior Roman citizens).

Anyway, on this particular date, those with the trendy togas looked up to see the sky darken. Like tourists for centuries, they probably thought - "Rats! (Mousus Gigantus!) Why did I pick the week of the 23rd? (XXIII)?"

Then they probably took a better look at the cloud. Instead of containing rain it contained the top 1/3 of Mount Vesuvius (Proximus Dormantus Volcanus). Shortly, the fine dust and pumice began raining back down on the posh resorts. (Seventeen centuries later measurements would indicate that it fell at a rate of over six inches per hour.) Soon, overburdened roofs collapsed and people were unable to move or breathe. The coverage was so quick and complete that when excavation began in the late 1700's, people were found at their tables or on their stoops (Porchus Stepi) covered by 19 feet of ash.

But don't let that memory cloud your day, however. If you can, sit by the pool (or even on your stoop) and sip something cool, but if your glass begins to get dusty, head offshore.