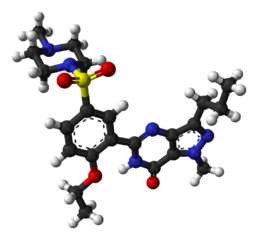 On this day in 1998, a chemical substance of great significance was approved for use in the USA by the FDA, after having been discovered by medical researchers in the UK two years before.  It sailed through the approval process in an extraordinarily short time.

What could this invention accomplish that would be so important that its application shot straight to the top of the list? The question is hard, to say the least, but let's look first at some of the benefits that have been uncovered since that day.

Researchers in Israel and Australia  have found that if the drug is dissolved in a vase of water it can extend the shelf life of cut flowers. It can make them stand up straight for up to a week beyond their natural life span. Amazing! It does that by slowing the breakdown of cGMP-specific phosphodiesterase type 5(cGMP), but you probably already guessed that.

The same process also slows down plant ripening. According to Wikipedia, "Tests were done on strawberries, legumes, roses, carnations, broccoli, and other perishables." Truly a wonder drug.

But that's not all. In 2007, three people in Argentina won the Nobel Prize in Aviation when they discovered that the same stuff aids jet lag recovery in hamsters. This had previously been a huge problem for the many hamsters who fly across multiple time zones. But no more, thanks to this wonder drug.

As impossible as it seems, the drug wasn't initially intended to fix these pressing problems. It seems that millions of men were having problems getting things straight. They had the same problem as the flowers that went limp too soon. The drug fixed that problem and formerly lethargic men became upstanding citizens.

The drug was Sildenafil citrate, more commonly known as Viagra. The people who use it are firm in their support and it became one of the biggest blockbuster drugs of all time.
Posted by Grant Davies