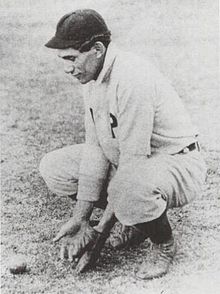 On this day (-2) in 1901, a native American named Tokohama (first name Chief), was signed to a contract to play major league baseball for the Baltimore Orioles. He was signed by John McGraw, one of the top baseball managers of that time, or any time.

Before being discovered by McGraw, Tokohama had played second base for the Columbia Giants of Chicago, a Negro League team.

When he played with them his name was Charlie Grant, and he was as black as any of them. Or at least as negro as any of them, because his complexion was light and his hair was straight, even if his story wasn't. In fact, he could easily pass as a native American. At least that's what John McGraw thought when he cooked up the whole idea of putting him in an Orioles' uniform.

During spring training that year, McGraw's team was staying at the Eastland Hotel in Hot Springs, Arkansas.   When he saw Charlie playing in a pick-up game with fellow employees of the hotel where he worked as a bell-hop, he signed him up. He changed his name to Charlie Tokohama (after a nearby river of that name he saw on a hotel map) and the whole righteous deception was on its way.

Back then there was an unwritten rule against black people playing in the major leagues, but McGraw was no fan of the rule, and neither were a lot of other people. According to History.com, folks like Bob Feller, Ted Williams, Dizzy Dean, Paul Waner, Lloyd Waner and Jimmie Foxx, Hall of Famers all, thought the whole thing was BS. McGraw had long coveted the talent in the Negro Leagues, scouted their games on many occasions, and had been a proponent of integration.

But the whole thing unraveled when the team traveled to Chicago to play the White Sox. It seems that "Chief" Charlie was recognized there because he was such a stand-out player with his old team, the Columbia Giants. It didn't help that his friends threw him a big public celebration.

Another guy named Charlie (last name Comisky), who happened to own the White Sox, got wind of the plan and objected. Grant and McGraw stuck to their stories for a while, with Charlie claiming his father was white and his mother was a Cherokee living in Kansas. But McGraw finally couldn't withstand the pressure and left Tokohama off the opening day roster, claiming he was inexperienced as a fielder.

So Charlie Grant returned to his real identity, played in the Negro Leagues on a few different teams until 1916 and tragically died in a freak auto accident in 1932 when a passing car crashed into him after its "Yokohama Chief" tire exploded. (Okay, I made up the tire name. I couldn't help myself.)