The Shortest Distance to Power is Not a Straight Line 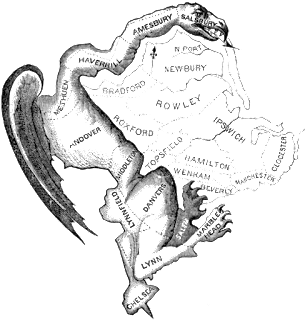 On this day (-1) in 1812, Governor Elbridge Gerry of Massachusetts was asked to arbitrate an important matter in the new nation.

Who better could you want? Gerry had signed the Declaration of Independence, been part of the Constitutional Convention and served as a member of Congress, before becoming Governor of Massachusetts.

As a father of our country, Gerry was asked to determine the lines of reapportionment for the State's senatorial delegation. He proceeded to draw a group of crooked lines that made a random walk look like a moonshot.

Amazingly, these squiggles happened to coincide with the strong points of Gerry's party. And a new word entered the language - Gerrymander - meaning to abuse your power in order to enhance the election chances of your friends and yourself. In the American tradition of justice, Gerry was punished by being elected the Vice President of the United States under James Madison one-year later.

Luckily for the nation no person known to do anything crooked or even to show favoritism to his friends was ever sent to the White House again.