The Price of Tea in Boston 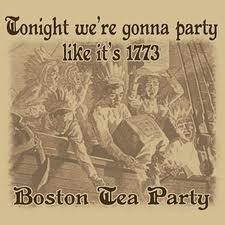 On this day (-1),  in 1773 (as you surely recall from Sister Herman Joseph's fourth grade class), a group of Colonists, disguised as Indians, boarded three British ships at dockside in Boston Harbor.  And, as you probably also recall, they threw tons of British tea into the Harbor.  And, you probably learned, this was all done to protest the outrageously expensive British tea. Well, you can't be right about everything.

The tea was not expensive; it was cheap - - too cheap.  That was the problem.  The good people of Boston had been making quite a living smuggling Dutch tea into the Colonies.  Now the Brits had cut the price of tea to undercut the smugglers.  So, a guy named John Hancock, who just happened to be making a fortune in duty free imports....(the Brits called him the head smuggler)....funded this little "tea party".

Sure, Americans have historically hated tyranny and taxation but if you really want to get them ticked off -- try a dose of deflation.

Many thanks to Art Cashin and UBS Financial Services who graciously allow his historical musings to be republished on this site. To enjoy more of Art's posts simply click on "Cashin's Comments" in the label section on the sidebar.