Winning at Saratoga Without Going to the Track 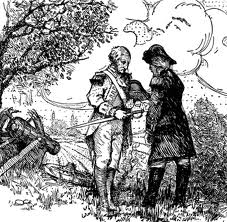 On this day in 1777, British Forces under "Gentleman" Johnny Burgoyne surrendered to American Forces in Saratoga turning the tide of the Revolution.  The victory could not have come at a more important time.  To the south near Philadelphia, George Washington was losing battles daily - at places called Germantown and Brandywine.

The Continental Congress was forced to flee Philadelphia under threat of capture.  There was even a move afoot to remove Washington as commander.  (What would the dollar bill look like?)

Then came the news of the victory at Saratoga.  The Americans accepted the surrender of nearly 6000 crack British and Hessian troops.  Not only did the victory re-spark morale - it enabled Ben Franklin to convince France to throw in with the revolutionaries - thus providing fresh ships and supplies.

And, as word of the victory spread through the colonies, a new hero was born.  A field commander, a brilliant leader and tactician, who was wounded in his courageous move that turned the tide of the whole Revolution, the man who saved the battle and the Revolution - why it was that famous American patriot - Benedict Arnold.

Editors note - For more about Benedict Arnold you can read our recent post, A Rotten Egg - Benedict Style.