Babe Ruth, in the End He Was Warped 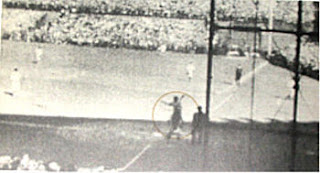 On this day in 1932, a guy named Harold Warp went to Wrigley Field to see the only big league ball game he ever attended.

The game was a World Series game between the Chicago Cubs and the New York Yankees, and just for the record, the Cubs lost. Or the Yankees won, as you prefer. It was a notable game for quite a few reasons, the Cubs loss not being one of them.

It was game three of a four game sweep by the Yanks and Harold was lucky to pick this one for his only trip. Just for fun he brought his movie camera with him to record some of the action. As it turned out some of the action he caught on film was historic, and valuable. The film clip was sold to ESPN in the year 2000, presumably for a tidy sum, particularly in 1932 dollars.

The film may not have shown the first pitch to Lou Gehrig in the fifth inning as it got drilled into the right field seats for his second home run of the game. But it did show the pitch right before that which ended up sailing into history before ending up in the center field seats. That one (also his second of the game) was hit by a guy you may have also have heard of, George H. Ruth. It ended up as one of the most famous shots in sports legend because the Babe "called it" by pointing to center field just before he took his historic swing.

Umm, or maybe not. The Babe made a gesture, that part is certain. But what he was pointing at, and why, remains one of the most debated events in a sport that sometimes seems more debate than sport.

As the story was retold, by the Babe himself and others, there was an inordinate amount of jawing going on between Ruth and the Cubs bench. Lots of gestures were made by the Babe toward them, and maybe the pitcher, Charlie Root, during the "at bat." Root had run the count to two and two and the hometown crowd was hugely agitated by the possibility of Babe striking out. But after two called strikes and a lot of verbal abuse from the dugout, failure was the last thing on Babe's mind.

That's when Ruth made a gesture with his finger (no, not the middle one), for the second or third time during the encounter. One respected baseball writer of the time, Joe Williams, took it as bold prediction by Ruth and wrote it that way the next day in his widely read column. He was initially the only one who mentioned it, and it's certain that he knew a good story when he wrote it.

Ruth also was tuned into the potential such a tale would add to his mystique, so when asked about it later he merely said, "It's in the papers isn't it?" Which is a tad different than what he told a reporter right after it happened. At that time he said that "he was merely pointing towards the Cubs dugout to tell them he still had one more strike." He told another interviewer he "did not point to any particular spot, but that he just wanted to give the ball a good ride." As time went by he seems to have bought into his own hype and the story grew as he claimed that he did indeed call his shot.

For his part, the pitcher Root, always claimed the whole thing was bogus. He was known as a pretty tough guy in his own right and told a reporter "Ruth did not point at the fence before he swung. If he had made a gesture like that, well, anybody who knows me knows that Ruth would have ended up on his ass. The legend didn't get started until later."*

The film clip from the Harold Warp movie seems to make it pretty clear to most observers that the Babe wasn't pointing to center field after all. I guess it depends on the angle from where you are sitting at Wrigley Field. The only thing for certain about the issue is that it will never be resolved to the satisfaction of everyone. But for the skeptical (perish the word "cynical") among us, the story of how it became a story is at least as good as if it had happened according to the script.

So, (as Art Cashin might wind up a tale such as this), to celebrate the controversy, stop by the Cubby Bear Tavern and hoist one to the "Bambino." But be careful not to drink so much that you get "Warped" along with Babe's famous story.

* Most of the information for this story, and all of the quotes, was taken from the Wikipedia entry on the subject. And if it's on Wikipedia, it's always correct. Well, as least as correct as the "Called Shot" story itself.
Posted by Grant Davies