Manny and the Flying Circus 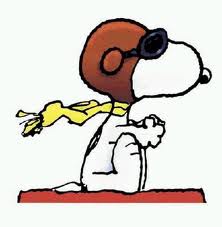 On this day in 1916, two Englishmen died and a legend was born. It happened during a misunderstanding that has come to be known as the "war to end all wars." (No comment needed on that.)

History has largely forgotten the unlucky Brits, a pilot named Second Lieutenant Lionel Morris and his passenger Lieutenant T. Rees, but everyone seems to remember the German pilot who shot them out of the sky on his way to aerial immortality.

Even more people remember that a delusional canine sitting atop a camel (Sopwith variety) while wearing a scarf engaged in epic dog-fights with the same German pilot. Historical payback can be a bitch, even if the dog was presumably a male.

In real life the ace was Manfred von Richthofen, better known as the Red Baron. And on this day, almost a century ago,  he made history by making his first "kill" when a short burst from his machine gun sent the above named pair to a fatal meeting with the French soil. It's claimed that he did the same thing another eighty or so times in the next few years, but that number is probably more propaganda than fact. Suffice it to say that he shot down more enemy planes than anyone else. Not bad for a guy who failed in his first try to get his licence to fly.

But Manny was a mover and he quickly learned his deadly craft. He was also a mover on the ground. He frequently relocated his squadron, along with all the tents and attending equipment from spot to spot. From the air it must have looked like a carnival going from town to town. At least that's what the enemy thought, so they dubbed the whole operation "The Flying Circus." It probably wasn't in admiration.

When he finally met his end in the spring of 1918, it wasn't quite as romantic as getting shot down by a puppy flying on top of a bullet ridden dog house. It was later determined that he was ignominiously done in by ground fire.

I don't know about you but I prefer the Snoopy story.

BTW, Manfred actually was a "Freiherr" (literally in German, "Free Lord"), a title of nobility which translates into English as "Baron." But he was no commie, the Fokker (his triplane, not Manny) he flew the last eight months of the war was painted bright red to honor the old cavalry regiment he was in before he dismounted a horse and flew into history.
Posted by Grant Davies