What a Difference Six Years Makes 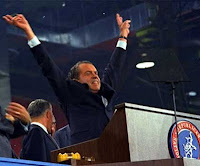 On this day in 1968, Richard Nixon was nominated by the Republican Party to be their candidate for the Presidency of the United States. The GOP party faithful were delighted. What a happy day! He went on to win the general election handily. He also went on to distinguish himself as the dope who inspired the phrase "the cover-up is worse than the crime."

His running mate was another dope named Spiro Agnew who went on to distinguish himself as an accomplished extortionist. He was eventually charged with accepting $100,000 in bribes while serving in various offices, including the Vice Presidency. His actual crime was taking hard cash from favor seekers, unlike the more sophisticated politicians of current times who take the payoff in campaign contributions. (Ya' gotta be nuanced, cash is so tacky.) The fool was forced to resign.

But let's fast forward past a few thousand other high crimes and misdemeanors to get to another event that occurred on this day as well.

Yep, you guessed. It was six years later to the day that Nixon nominated himself to become an ex-President. The party faithful wasn't nearly as delighted this time. He went on to distinguish himself as the first President to resign in disgrace. (The resignation part was the main difference between him and the majority of those who disgraced themselves subsequently.) 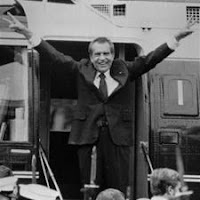 So six years later he still had that stupid look on his face while he held up double victory signs as he boarded the government helicopter that  flew him into historical oblivion.

PS--Nixon died in April 1994 and the country had a day off for the funeral. To mark the occasion, I decided to play golf with some friends. I scored a hole in one on that day. Maybe I should call him Richard now, instead of Dick.