He Was All Thumbs 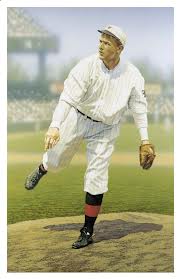 On this day (+1) in 1905, a 25 year-old kid from Factoryville, PA. caught the thumb of his right hand in a bureau drawer.  Now, since at this time, lots of kids in Factoryville were getting thumbs, fingers and other appendages caught in things like stamping machines, you may wonder why this particular thumb and this particular drawer were of note.

Perhaps the reason was that this kid was no longer working in the Factoryville area but rather in an area of NYC called Coogan's Bluff.  His employer (the N.Y. Giants) hoped the thumb incident would not impact his work (which had been good to date).

His name was Christy Mathewson and he was on his way to a 31 and 8 season (with a rather amazing ERA of 1.27). Giant Manager John McGraw need not have worried however.  That year they probably could have hit "Matty" with a truck and he'd have won anyway.

He proved that point in the World Series against the Philadelphia Athletics when he virtually won the Series singlehandedly.  He had to pitch 3 games in six days.  Not only did he win them all by shutouts - - he never even let an "A's" player reach 3rd base.  His ERA for the World Series of 1905 - - just 0.00.

And, folklore has it, when it was all over he raised his right hand and gave the "thumbs up" sign.