A Goodnight for a Drive 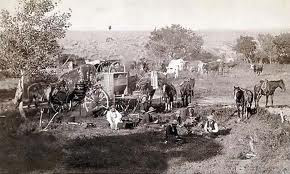 On this day (+1) in 1866, two men imbued with those building blocks of Americana ingenuity and avarice - took a new route to fame and fortune.

The two men were Charlie Goodnight and Oliver Loving.  And what they invented was the "cattle drive." "Wait!" you say.  "There were plenty of  cattle drives in 1866!"  Yes, you little historian you, and that's why this is different.

Each year hundreds of herds were driven north from the Texas grazing land to the stockyards at the rail-heads in Abilene and Dodge City.  That was the trouble.  They all went the same way to the same place at the same time of year.  So it was always tough to get a good price.

So, Goodnight and Loving decided to drive a herd west to Colorado where there were hundreds of hungry silver miners who would pay anything for a good steak. Thus, on this day (+1), Goodnight outfitted a Conestoga wagon with strong iron axles, a chuck box and a barrel of sourdough starter.  This became the prototype of the "chuck wagon."

Then with 2000 longhorns and 18 cowhands, the next 30 days looked like Abbott and Costello go to the cattle drive - stampedes, alkali holes, 80 miles of near desert, etc.  By the time they reached Fort Sumner, they had lost 30% of the herd.  But the army paid so well for part of the herd that Goodnight went back to Texas for another herd while Loving took the balance to Colorado.  On each successive drive they used the things they learned and never lost a single head again.