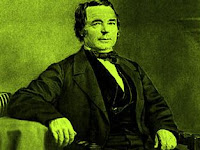 Somewhere around this time in 1897, an Englishman named James Henry Atkinson - an iron worker by trade - decided to fiddle with a few things commonly found in any modern garage. But what he ended up with after a little trial and error proved to be more than just a little piddling fiddling. The resulting contraption became one of the least improved upon and most enduring inventions of all time.

Its purpose was to dispatch any Mus musculus who happened to entertain ideas of becoming a guest diner in your house, sans invitation. You guessed it; James did it.  He built a better mousetrap.

It's thought that James' lethal gadget was inspired by one designed by a guy named William C. Hooker of Abingdon, Illinois, who received a US patent for his design in 1894. His was the first spring-loaded vermin exterminator, but apparently it had a painfully common problem; it tended to snap closed on the fingers of the trapper as often as on the neck of the furry trapee.

So James tinkered a tad with Hooker's idea and came up with the design that endures to this very day. It still fools the little fools, even those who are smart enough to compete with Algernon. It just doesn't seem to occur to them that a little peanut butter dabbed on that tiny metal platter isn't dessert, but an invitation to dine at the "Afterlife Cafe."

Although his invention is deadly efficient, one need not worry too much about this species being added to the endangered rodent list. You see, although they are a tad gullible when it comes to peanut butter, they are smart enough to screw their way out of the larger problem. The math is simple, and although it probably never happens, two of these little humpers can produce a million descendants a year. We have a lot of peanut butter in the world, but not enough, so Mickey and his friends are safe as a group, if not as individuals.

James' product was called the "Little Nipper" and it sold like, well, like a better mousetrap. It's not known if there was a path worn to Atkinson's door, but he sold the patent rights for about £1000 and moved on anyway.
Posted by Grant Davies