And the Meek Shall Inherit..Oregon 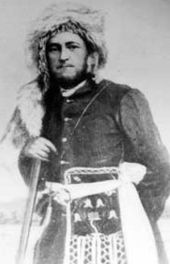 On this day in 1875, a farmer in Oregon passed away at sixty-five years of age. It sounds like a pretty mundane event, but the man who died that day had lived anything but a mundane life.

Joe Meek was a big man who seemed determined to make himself even bigger. In his younger days he told stories about his experiences as a mountain man that were significantly taller then his six foot, two inch body.

Wrestling a grizzly bear barehanded before dispatching it with a hatchet was a favorite, both for the teller and the listener. The Vegas line on him becoming a politician was better than even money, but since the only interested parties were a tad removed from the betting parlors, there wasn't much action.

Joe started out life in 1810 in Virginia and not much unusual happened until he got the wanderlust at seventeen and moved west to join his brothers in Missouri. From there he headed for the hills and things began to get interesting. He alternately made friends with, or fought against, native American people while trapping beaver and other critters in what later became Yellowstone Park. And since dating prospects were rather limited due to a lack of singles bars in the area, he decided to marry a Nez Perce girl whose father happened to be the chief. It was probably a good preventative measure against premature hair loss. The Blackfeet tribe however wasn't impressed. They considered him a trespasser and they spent some of their time trying to kill Joe. With the exception of one close call, they obviously had no success.

He went on to marry a few more Indian girls just for good measure. But it didn't work in the long run because in 1847 a band of  Cayuse and Umatilla Indians decided to kill a bunch of folks, fourteen in total, in a misunderstanding  that came to be known as The Whitman Massacre. Meek's daughter, Helen, a ten year old, was one of them and it irritated Joe enough to send him back east to have a chat with the President of the US, a guy named James Polk, whose wife just happened to be Joe's cousin.

Meeks arrived in Washington and promptly declared himself to be "envoy extraordinary and minister plenipotentiary from the Republic of Oregon to the Court of the United States." He asked that Oregon be made a territory and the government send troops to defend the folks there against attacks by the locals. Everyone thought Joe was a cool guy and told great stories so Congress granted his request, made Oregon an official territory and the President named Meek a U.S. marshal.

So Joe went back west and became an important politician. It all proves that in order to be in a position of power you only need a good story and to be meek, or Meek, as the case may be.
Posted by Grant Davies