The Man Who Saved the Whales 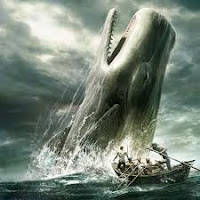 Sometime during the year 1846, a doctor in Halifax, Nova Scotia, named Abraham Gesner, became fascinated with the study of coal, specifically coal tar. He found that if he distilled the otherwise useless tar into a substance he called kerosene (no one knows why he chose that name), it burned with a light as nice and steady as whale oil, and was a hellava lot cheaper to make.

The vast majority of sperm whales (not known for sperm) and a lot of the other types of whales had already been harvested to the edge of their existence so people could stay up late at night to read stuff like this. Thus, the price rose higher than most folks could afford anymore.

With his discovery/invention, the doctor made more than enough to afford a lot of other things and was able to make enough of the kerosene to light the streets of the town. But it soon became obvious that no one could make enough of it using his method to light the world and the whole thing became a conundrum he couldn't overcome.

Meanwhile, a few years later (1853) and a few miles south, in Hanover, New Hampshire, a guy named George Bissell, a former educator and Dartmouth alum, stopped to see an old prof of his there. During his visit, he just happened to learn that some "stuff" in a bottle on the shelf, called "rock oil", was seeping to the surface of the ground in Pennsylvania. George was curious about the stuff and started to experiment with it.

He found that it burned even brighter than the kerosene that Gesner invented and figured that if it was already seeping to the surface, all he would have to do is find a way to pump it out of the ground in industrial quantities to solve Gesner's conundrum.

He set up a company, sent some people to Pennsylvania, and started drilling holes. After some fits and starts, and just as their money was running out, they got lucky. Bissell got rich, and the whales were saved.

Oh yeah, there's more to the story, there always is. A few others took notice (one named Rockefeller) and began to do a better job than Bissell of finding it, refining it, and selling it. They got even richer.

In the end, because the doctor found coal tar interesting:
The people saw the light, a once useless byproduct (gasoline) found a use, and the whole world, as well as the whales, was better off.

The moral of the story; you can save more whales making some Green, than you can making some Peace.