A Sightseeing Cruise, With All the Passengers You Can Eat 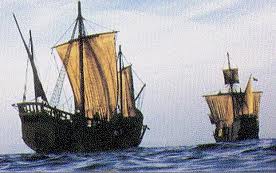 On this day in 1536, there began one of those ventures that remind us cynics of the hope and promise that once was America.  To hear today's citizens tell it, there's something in America that brings out a "dog eat dog", survival of the fittest attitude. When did all this happen??

Well, anyway back in 1536, America was new, pristine, an innocent wonderland. Columbus had found it just 44 years earlier.  Cabot and Verrazano claimed to have seen wondrous shores teeming with lobster just a few years earlier.  It would be nearly a century however until there were pilgrims, Henry Hudson, John Smith or
Pocahontas.

But rumors of this new and glorious virgin land inspired curiosity - a kind of Jurassic Park of its day.  And as Michael Eisner might say when folks are curious, or seek adventure and hope to see something new - there is money to be made.  (Okay! Okay! Skip Euro Disney.)

So a man named Richard Hoar (or Hore) offered (for a fee) a fantastic cruise to this wondrous new land and back.  He was an experienced sea-captain and also knew how to advertise.  Soon, 25 well-to-do young men (and their servants) as well as a small group of the aspiring middle class signed on.  Capt. Hoar rented two boats and with 120 adventurers sailed west.

Ship A, which Hoar captained, led the way and also led a rather spartan, disciplined life for a cruise ship.  Ship B, which had more of the wealthy young men aboard confused itself somewhere between "the Love Boat" and a frat party.  When they arrived in Newfoundland, Ship B had somehow run out of both wine and food. Hoping to conserve the remaining provisions, Hoar suggested they set out in this bountiful land, to hunt and forage to feed themselves.  Used to playing fox and hounds (but lacking the requisite horses, grooms, valets or even red riding coats), these well-bred lads tended to come back to camp bearing bunches of either
dandelions or poison-ivy (often both).  Soon the food was virtually all gone and stomachs were growling in hunger.

Then two lads, whom we'll call Percy and Throckmorton, went off on a two man foraging party. They went into the woods and over the hill. The next day folks saw smoke from the boys' campfire.  The second day, more smoke.  The third day, Percy came back and said Throckmorton got lost on the way home.  After a brief memorial service, folks began to notice Percy kept picking his teeth and burping which was strange in a guy starving to death.  Soon Percy asked one of the chubbier guys if he would like to go over the hill and look  for Throckmorton.  Soon everybody was inviting everybody to go for a walk, and more and more folks seemed to get lost.

That Sunday, for some reason, Captain Hoar felt compelled to preach a sermon on cannibalism. Ironically, that very night more tourists showed up in the person of a French fishing boat.  The stranded cruise crew waved hello and when the French came close enough they seized the boat and pummeled the crew.  Now having food and a functioning boat, they returned to England.

Apparently nobody signed up for the cruise the following year.

This story originally appeared in the Cashin Comments market letter, a publication of UBS Corp. It is republished here by permission of the author. Many thanks to Arthur Cashin and UBS. We are delighted to present their articles to new audience. The titles and images are the work of the editor of this site.
Posted by Grant Davies