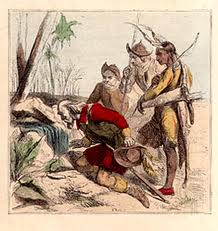 On this day in recent history, one month ago to be exact, the author of this blog first discovered St. Augustine, Florida.

No, I wasn't the first person to discover it. It was just my first time being there. The distinction of being the first person to discover it belongs to a guy named John P. DeLeon. (No relation to a guy with a similar name who made a car that nobody bought.) John arrived aboard a boat powered by free air, instead of  the way I got there, via an automobile powered by hugely expensive gasoline.

Actually, his name was Juan de Leon, but today everyone knows him better by his middle name, Ponce. And it really was on this day, in 1513, that he first got off his ship and came ashore in his quest to find immortality, or more precisely, the fountain of youth.

It's a good thing he wasn't searching for the fountain of wisdom, because the idea of drinking the water there was really, really stupid. In the first place, it stinks to high heaven (like a billion or so rotten eggs), and in the second place, just a few sips would have killed you back in the day. Which, I guess, would keep you from getting older, although that's not exactly the same thing as staying young.

Anyway, there was no town to discover back then, or even a place called Florida, much less the fabled fountain. So he just looked around a bit and then claimed that the whole peninsula (which he mistakenly thought was an island) now belonged to his royal benefactors back in Spain. He named it "La Florida" after Pascua Florida, the Easter feast, because it was just about that time of the year when he arrived.

He liked the area so much that he returned there in 1521, just in time to be set upon by the native people and get mortally wounded. He fled to Cuba, perhaps because he heard they had free healthcare there, where he subsequently died from his wounds. So much for immortality.

As for me, I liked the area for different reasons than old Ponce. It has great weather, sightseeing, restaurants, bars, beaches, and some terrific golf courses. The World Golf Hall of Fame is there as well. The water still stinks, but at least you won't die if you drink it. I drank the beer instead. I also put on about six pounds while I was there, which probably won't help me stay young either.

Unlike Ponce, I was never attacked by any Florida natives, but then again, I didn't try to claim I owned the joint.
Posted by Grant Davies