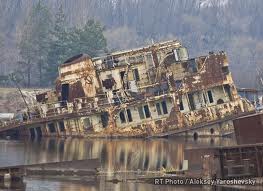 On this day in 1986, folks at the Swedish Institute of Science began to notice something strange.  So they picked up the phone and called the Kremlin. "Excuse us," they asked, "but could you tell us why our instruments are showing a nuclear cloud drifting our way from an area in the Ukraine near Kiev, in the province of Sverdlovsk that we see on our map as the place called Chernobyl."

The initial Kremlin reply was something like - - "Thank you for your solicitous call. However, we not only think your instruments are faulty, your maps must be outdated, for there is no place called Sverdlovsk nor a place called Chernobyl."  "We hope to have new maps out by Thursday!"

Well, a little while later, the Russian leaders, looking glowing and radiant, did admit that they had invented a new form of eternal flame.  And a variety of biblical scholars (non David Koresh variety) did a minor gulp.  For in the book of Revelations, a burning Wormwood poisons all the waters of the Earth.  The gulp was caused by the fact that in Ukrainian the word Chernobyl means "Wormwood." But that was 26 years ago and you've never felt better, have you?

(Editor's update - Sixteen years ago there were news reports that some of the regenerating radioactive detritus from Chernobyl had begun to seep into the local river and may spread into the European watershed. Just an odd coincidence, we are sure.  Anyway, don't you worry!  I'm sure you do know where your bottled water comes from, don't you?)

This article is republished here with the kind permission of Mr. Cashin and UBS Corp.