The Day the News Business Took Off 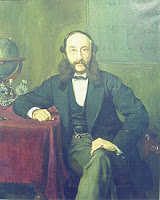 On this day (+1) in 1850, the stock market in Brussels was soaring, literally. Actually, the prices were pretty stable, it was the messengers who were going up and down. You see, the news was flying from Brussels to Aachen, Germany on the wings of forty pigeons who had been released with the Paris stock market prices attached to their legs. The "attacher" was an enterprising man named Israel Beer Josafat. (At least that's what his parents named him when he was born thirty four years earlier.)

The idea was to make the news transmission between those two cites faster than the train and fill the missing information link between Paris and Berlin. It worked rather well in that period before the telegraph could transmit the happy, or sad, news of the day's activity.

By the time Izzy was releasing his birds he had already changed his name more than once. The son of a Jewish Rabbi, he moved to London from his birthplace in Kassel, Germany and started to call himself Joseph Josephat as soon as he got there. A short time later, he made it official by changing it to Paul Julius Reuter when he converted to Christianity before getting married back in Germany only a week later.

By the time he moved back to England (a year after his couriers took flight) and set up offices at the London Stock Exchange, Reuter's name began to get as recognizable as it is today. He ended up as a British subject, was named a Baron, got confirmed by Queen Victoria as English nobility, and produced a slew of children and in-laws, all with goofy titles too.

Along the way he got into the financial news business full time. Yep, it's the same "Reuter's News Agency" that still operates today as Thompson-Reuters. The company is not considered a "high flier", but it could be argued that the day he set the pigeons loose was the day the business really took off.
Posted by Grant Davies