Blown Apart by a Case of the Hiccups 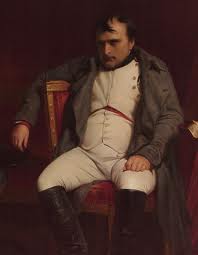 On this day in 1814, Napoleon Bonaparte stood in the hands of captors.  Just three years earlier he had been the self-proclaimed Emperor of France, de Facto ruler of most of Europe and the proud father of a new-born son by his second wife.  In addition, even his enemies had conceded him a unique sense of governance - his Napoleonic code stands to this day on two continents.

But he had an aggressive Merger & Acquisition department that told him to gamble all this for a hostile takeover of Russia.  It wasn't junk bonds that did him in.  Instead it was junk weather.  When his victorious army found itself forthright but freezing, he was forced to retreat.  And even though he fought off old enemies in incredible ways - once they touched French soil he abdicated to save his people.

So, here he was, a short Corsican kid with a great mind and a lousy stomach who had come up just short of ruling the world in a way Alexander and Caesar never quite made. Unable to accept this fall from grandeur, he secretly asked his private doctors for poison, that he might die rather than be humiliated.  Once he had taken the potion, he decided to move for the melodramatic.  Why die in your room alone when you could make a grand gesture?

He summoned his guards and demanded a meeting with his counterparts, the leaders of his captors.  Once in audience, he would speak of the great work he had done and then die dramatically at the feet of these Lilliputians. At the audience the medicine began to take its effect.  But it was counterbalanced by the medication for his ulcer.  Before his magnificent speech began, he developed -- hiccups.

So the nearly emperor of the world did not die defiantly at the feet of his captors.  Instead he hiccuped and stammered until he had to be helped - incoherently and inaudibly back to his bed. Doubly lost, he quietly went into exile at Elba, but a year later when the medication wore off, he escaped and within 100 days, he had nearly recouped all his former glory.

But then came Waterloo - but that's another story, for another day.

This story was originally written for Cashin's Comments, a publication of the UBS Corporation, and is republished here by permission of the author.
Posted by Grant Davies