Mary Had a Little Book 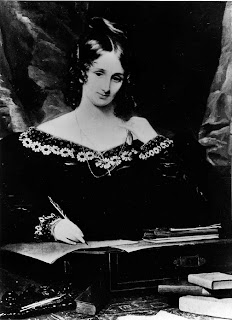 On this day (-1) in 1818, a 21 year old girl named Mary had her first book published in London, anonymously. One of the book's two titles was "The Modern Prometheus."  Mary's name wouldn't be listed as the author until the second edition was published in Paris some five years later.

It seems that Mary had a life full of tumult and the character she created in her book was no different. She never even gave him a name, but he referred to himself in the story as Adam. It was a weird story for the times. No one had ever written one quite like it before.

Like a lot of the stuff written here, the idea for her story came to Mary in a dream. She actually was inspired to write the book while engaged in a "Let's have a ghost story writing contest" that had only three other contestants, none of whom even finished their stories. So I guess Mary won even though history never tells us what the prize was.

One of the other contestants was a guy named Lord Byron, and another was a guy named Percy, to whom she just happened to be married. It seems that they were staying at Byron's pad in Geneva, Switzerland where they basically had fled in order to avoid paying some debts Percy owed back in jolly old England.

Anyway, he had a woman's first name for his last name, Shelley. Which made her Mary Shelley. Her book's other title, the one we all remember today, was Frankenstein. It became a  monstrous success.
Posted by Grant Davies