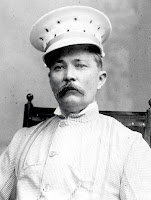 On this day in 1871, a guy named Henry (whose real name was John) began looking for a doctor.

In the days before WEB MD, it took him more than seven months to find the right one. Henry really didn't need a doctor, at least not when he started. As it turns out, he was being paid to find one particular doctor, and that doctor was living in a small village in Africa at the time, so it took a while. The story is a tad confusing, as was Henry's life.

Henry Morton Stanley, who stole that name from a merchant who had befriended him, was actually a guy named John Rowlands, who had been born in Wales about thirty years earlier. He was an orphan (a polite term for a bastard) and because his parents weren't married, was raised in a "workhouse." At eighteen years of age, seeing no reason to stay in Wales with a family he didn't have, he set out for America.

To get across the pond he signed on as part of the crew on a merchant vessel, but once across, he jumped ship in New Orleans. After he made friends with the real Henry Stanley, he swiped his name (presumably to avoid his obligation for passage), and later decided to fight in the American Civil War. He served as both a Confederate and a Union soldier, so it seems he really was more passionate about the adventure of war than the cause of it. He finally settled on being a journalist, which is how he landed the gig to lead the search party for the doctor in Africa.

And so it was that on this day back then, he left from Zanzibar with a party of about two thousand men and by the time he found his guy all those months later, he had suffered from small pox, dysentery, and cerebral malaria, so he really did need a doctor. However, Dr. David Livingston, whom he had been searching for, was in no shape himself to heal anyone since his obsessive adventure to find the source of the Nile river had left him in poor health and even poorer finances.

Anyway, when Stanley first saw a white guy standing in the crowd of black people who came to investigate the newcomers in town, he "presumed" it to be his quarry and blurted out - "Hi Dave, I'm Stan!" -or something like that. And that's how John (or Hank, or whatever his name was) became famous.

As it turns out, Livingston refused to be "saved", stayed in Africa and died a few years later without finding the source of the river. His body was embalmed and was sent back to England, where he became famous too.

At least I presume so.
Posted by Grant Davies