The Evolution of a Scam

On some day in 1925 (but not this one), a group of politicians and other civic minded town fathers gathered at Robinson's drug store in the small town of Dayton, Tennessee.

Their purpose was to cook up a scheme to promote the town, or "put it on the map" as famous newspaperman H.L. Mencken later described it. In other words, they needed a publicity stunt for some much needed PR for the town.

The state of Tennessee was one of three states that had recently outlawed the teaching of the theory of evolution and the ACLU was advertising in the paper for people who wanted to be the test case for a big trial to bring attention to the issue. These folks knew an opportunity when they saw one.

So they asked a "phys-ed" teacher who substituted from time to time as a biology teacher if he wanted to be a test monkey in the plot. Of course, we now know that John Scopes said yes. Since the theory was part of the text book that was used in the biology class he sometimes subbed for, he could honestly answer that he had indeed taught the subject.

The whole fiasco, from the arrest to the hoped for outcome, was planned ahead of time. John agreed to be arrested at the meeting so he didn't have to postpone his scheduled tennis game that afternoon. Everyone, from the defense team led by a dude named Darrow (Clare to his friends), to the prosecutor wanted a guilty verdict so they could take the whole show on the road for a repeat performance on appeal. 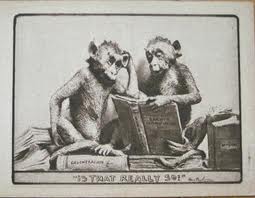 Unfortunately, (unlike in Chicago), the judge was not sufficiently in the loop, so although he found Scopes guilty, he let him off on a technicality which threw a monkey wrench into the works for the famous "Scope's Monkey Trial."

It was all just monkeying around back then and it still is today.

The information found in this article was gathered from "The Greatest Stories Never Told" by Rick Beyer.
Posted by Grant Davies