It's an Ill Wind That Blows No Good 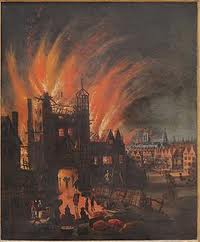 On this day in 1666, a massive fire broke out in the city of London, England. It began in a bakery on Pudding Lane, which was on the East End (between London Bridge and the Tower).  The fire raged into the shop (or shoppe) next door which sold ship's goods, especially tar and turpentine.  That building not only caught fire, it exploded raining flaming tar down on the wooden buildings in the neighborhood.

At first the authorities dismissed it as a local blaze.  The wind had other ideas, however.  It whipped up in strong gusts and soon the flames were spreading across the city.  By mid-morning the next day much of the city was on fire and much of the populace had taken to boats and barges on the Thames. The king called for a team of Navy gun experts to blow up blocks of buildings to form a firebreak.  Luckily, the strategy worked and after raging three days, the fire burned itself out.

The devastation, however, was huge.  Nearly 500 acres of the city was nothing more than ashes.  An estimated 15,000 homes and nearly 100 churches were fully destroyed leaving 100,000 homeless.  Amazingly, the human death toll was set at 10.

Under the rubric of "It's an ill wind that blows no good" the disaster was, in fact, a blessing in disguise.  The year before, nearly 100,000 Londoners had died of the Plague.  A new outbreak had been feared but the fire destroyed the rat hovels where the plague-bearing fleas had prospered. After the Great Fire, the Plague virtually disappeared.  No one realized it at the time but the fire saved the city.

Please enjoy some great stories by Art Cashin while I attend to some joyful family affairs. I'll be returning soon.