Snake-bit by Her Bosom Buddy 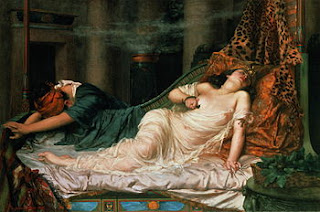 On this day in 30 B.C., perhaps the most famous queen in all history pulled an unassisted Kevorkian.  Unproven legend claims she did so by pressing her asp to her bosom.  (If you think that makes her marvelously double jointed, there is something wrong with the lettering on your screen.)

The queen in question was not queen for a day but maybe queen for all history.  Her name was Cleopatra.  Of Greek heritage (one of Alexander the Great's generals, don'tcha know!), as a teenager she married her brother (an old Egyptian dynastic custom).  However, bickering over whom  mom always liked best led to civil war (well....there were no Sally Jessy shows back then).

Said civil war led a certain J. Caesar to assume that Egypt was ripe for the picking.  Noting that said Caesar had a rather large army, the coy Cleopatra tried the batted eyelash maneuver on him.  This of course worked for a while until his health failed (some stabbing pains in the forum, I hear). Said Caesar was succeeded by a Triumvirate (or maybe I got that wrong - it coulda been three guys).

Anyway, one of them was Mark Antony (upon whom Cleo applied the above-mentioned eyelash trick).  Again it worked for a while until the other two guys (under Lepidus and Octavian on your program) figured the queen had too much influence on Mark. They sank his ambitions at a place called Actium.  Then the plot thickened.

Cleo figured Octavian was the new man about town.  But Mark Antony was still in the way. Cleo sent a message to M.A. saying all is lost and I have 86'd myself.  Advise you do same.  Mark Antony complied.  Cleo then sent a message to Octavian saying - Yoo Hoo!  My boyfriend's gone!  Octavian told the messenger that he was preparing a gilded cage in which to parade Cleo through the streets of Rome.  Not being into the zoo thing, Cleo performed the above-mentioned unassisted Kevorkian.

To mark the day, continue to adjust to changing environments but remember it's always critical to watch your asp.